Benefits of Studying in Canada in 2020

The 2020 year has begun, and it is time to set the study goals, seize the right opportunity, and fulfill your dream to study in Canada. Over the years, the country has emerged as a perfect destination for those who want to take their career to new heights. They choose to study in Canada because of quality education and the finest research opportunities. Even Canadian universities and colleges are now proactively helping international students feel home. The year 2020 looks promising for international students. Here is why...

According to the Canadian bureau for international education, the quality of education provided by Canadian universities and colleges is the number one reason international students come to Canada. Secondly, at the moment, the Canadian dollar is weak due to which the tuition fees are relatively lower in Canada if we compare to the USA and the UK.

Studying in Canada is also advantageous because the Canadian population is getting old, due to which there is a significant number of job vacancies available. It is expected that by 2026 Canada will join the league of super-aged countries like Japan and Italy. Therefore the Canadian government itself encourages international students to study, work, and settle in Canada. In fact, the government admits that international students are Ideal students for permanent residency.

As most international students are young, have Canadian educational qualifications and in-demand labor skills, and are proficient in one of our official languages, they are often ideal candidates for permanent residency. In fact, nearly 54,000 former students became permanent residents in Canada in 2018. - Ahmed Hussen, former Minister of Immigration, Refugees and Citizenship.

“Over the next five years, the new International Education Strategy (the Strategy) aims to diversify the education sector… The Strategy aims to draw students from around the world to communities across Canada where they can enroll in a wide variety of schools and programs at all educational levels “. 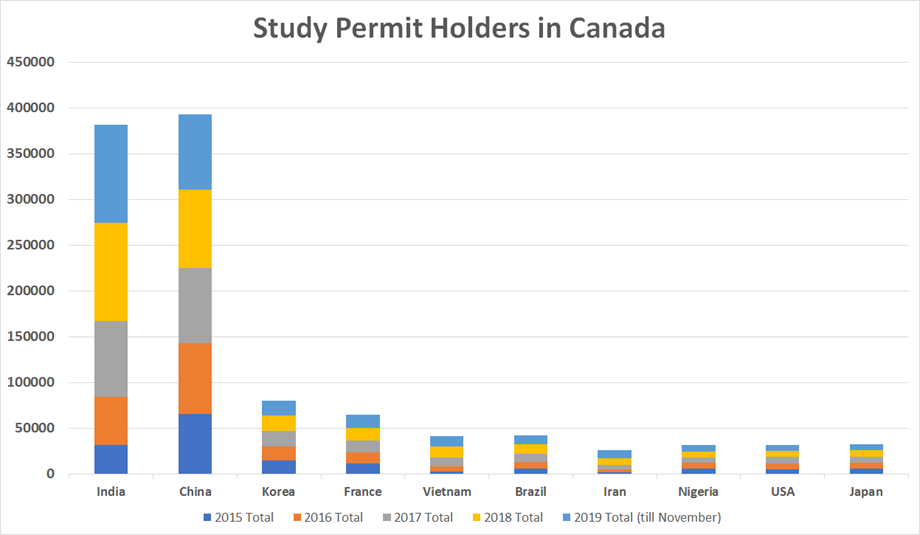 Till November 2019, there were around 355245 study permit holders in Canada, and it is expected that it will soon touch 400000. The major contributors to this list are China and India. The data shown above includes data from major countries from which international students are coming.

Apart from quality education, employment is one of the major reasons why international students come to Canada. According to CIC News, in the third quarter of 2019, approximately 433,000 jobs remained unfilled. The report also revealed that Quebec, British Columbia, and Ontario are the worst hit provinces where unfilled jobs remained 119800, 71,400, and 168000, respectively. The report further revealed that IT, agriculture, hospitality is some of the major industries where jobs are available. International students have a great chance in their hands to tap on these job opportunities. International students can work in Canada both during as well as after completing their study programs on a work permit, which can be up to 3 years.

While working in Canada, international students can apply for Permanent Residency. When Candidates apply through Express Entry System, they get extra points on having Canadian work experience. In 2019, around 3.41 million people got PR. Canada is a beautiful country to live in. USnews have given it top rank for Quality of life.